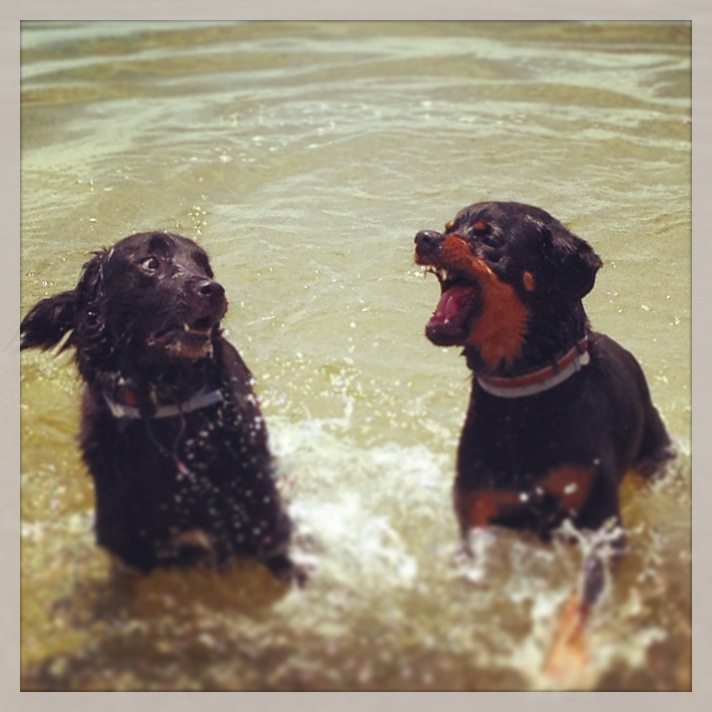 The following was written by our business manager, Britteny

My dog, Jake, just turned 10. If you have had a session with Nikki, you may have seen him. He’s a goofy flat-coated retriever mix I rescued 8 years ago. He thinks all humans exist to pet him, and he thinks all dogs should be his friend (unless he’s on leash, then he barks and lunges…an issue I’m working on).

When I got Jake, he was friendly and lovable, just as he is now. He also laid around- A LOT. To most of us, this would be a non-issue. A dog who is friendly, rides well, is house-trained and is laid back? I really didn’t think it could get better. However, I soon noticed Jake had some phobias. Every time I folded laundry, this guy ran and hid, or looked at me like I’d just kicked him (which I would never do). He also cowered if anyone said his name too loudly, and whined/barked in his crate.

When I met Nikki, I mentioned the phobias. After delving a little deeper, she discovered his lack of confidence was worse than expected. So, we started working on some confidence building exercises. Then…he started acting like a jerk. First, he started jumping on window sills and barking at dogs passing by. Then, he started barking at dogs while on leash. After that, he started crying from excitement whenever he got in the car. The. Entire. Trip. I thought building his confidence and using positive training methods would make him better…not worse!

Well, here’s the reality. When you build a fearful or nervous dog’s confidence, they start becoming real dogs. And real dogs try new behaviors to see what works and what doesn’t. They aren’t afraid to try new things, even if the puzzle piece doesn’t quite fit. Jake doesn’t lay around as much anymore. In fact, he’s pretty darn active and puppy-like. If he offers inappropriate behavior, he doesn’t get yelled at, or corrected with a collar; he simply doesn’t earn a reward. His tail is usually up and wagging (he has great circle wags). Is this new confidence thing a pain sometimes? Yep. Does it mean I have to work on behaviors I wouldn’t have otherwise had to deal with if I had continued to let him be timid? Absolutely.

Though having a newly confident dog can sometimes present challenges (and embarrassment), I wouldn’t trade my ol’ guy for anything. I know he’s happier and less stressed, which makes me feel the same.  I know it’s hard, but stick with it.  It’s worth it.