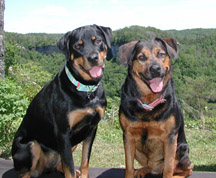 A dear client of mine communicated to me that he believed his dog was manipulating him into giving a treat, pet, toy or just attention (by pawing, offering inappropriate behavior, etc).

So why do the semantics matter so much when we describe a dog’s motivation matter? Because of our own capacity for manipulation, and our disdain toward it. If we believe our dogs are trying to manipulate us into doing something, we see our dogs in a negative light. This negativity can spill over into how we train, and often causes us to focus on our dogs’ negative behaviors rather than rewarding the positive ones.  This ultimately will cause the human-dog bond to suffer. Focus on what you want your dog to learn rather than what you behaviors you want to correct.

When a dog tries or offers new behaviors, she is not being manipulative, but is communicating what she wants (or is communicating “hey, this behavior got me attention before”). When a dog wants something he will try different behaviors to see what it gets him. We do this as humans. Think about when you’re attempting to use your phone but you keep losing signal. You inevitable offer different behaviors such as moving around, changing ears, turning your head a certain way, etc. to attempt to get more bars. If this works once, you will continue to do it in other situations where you have bad cell service until it no longer works. Dogs do the same thing. If a behavior works for a dog then he will repeat it. He will continue using that behavior until it no longer works over a period of time. It doesn’t matter to the dog whether you see it as bad or good, only that he receives a reward from it (typically attention in cases of inappropriate offered behavior).

I always want my dog to communicate with me. Communication is the first step in trust and trust is a very important part of a relationship. So when your dog is offering behavior just remember she is communicating, not manipulating.