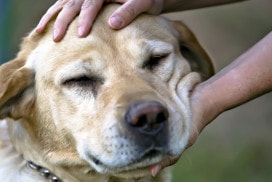 During a recent Saturday night downtown with friends, I noticed a couple walking their Bernese Mountain Dog. I watched as this couple was stopped over and over again so people could pet their dog. While I continually preach the importance of socialization, I could see this dog was clearly overwhelmed.

As I watched, the dog’s body language slowly changed from interest in the people to fear. Unfortunately, the owners were unaware of their dog’s demeanor, which is when I decided to interject.

While the male owner was receptive of my unsolicited advice (yes, I became one of those people), the female owner was less than thrilled at my recommendation to remove the overwhelmed pup from the situation, and (not so) politely told me her dog would never snap at anyone and was fine. Though frustrated for the dog, I took my hint and left.

My point in telling this story is this: when your dog is around other people, it is your responsibility to ensure your dog feels safe and to ensure you correctly read your dog’s body language. If you see your dog is overwhelmed, it’s okay to tell people to not pet your dog at that time. It’s okay to take your dog out of a situation and give him some downtime. Forcing a dog to continually endure petting could cause a dog to form a negative association with outings and people. You can easily turn a well socialized dog into a dog that prefers staying away from people and is less excited to go on adventures. You can also cause a dog who typically gives passive signals in stressful situations to one who reacts in a less passive way.

Imagine someone forcing you to stand still to allow strangers to approach and hug you. How would that make you feel? How long would you be able to endure this before you lost your cool and reacted in an aggressive way?

If you are out with your dog and see any of the following signs you should immediately find a quiet place to allow for some downtime:

Head turns away from interaction with people

Body turns away from interaction with people

Turning and sitting away from people

Ignoring people by doing something else i.e. sniffing

Constantly reward your dog for offering passive signals in social situations. If your well-socialized, friendly dog isn’t reaching out to be petted, then he’s probably ready to head home for the couch.