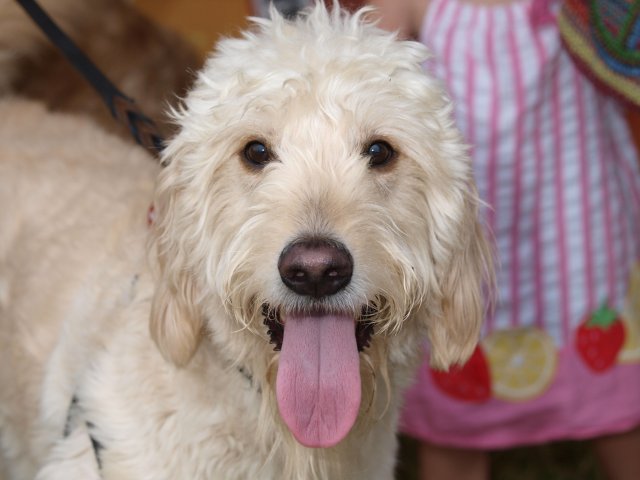 Consistency and follow through are crucial when training. It is important to set expectations that fit into your life, and stick with them. You should have this consistency throughout the day, not just when putting a leash on or when waiting at the door. This is one of the most difficult lessons I teach. It is not surprising that humans have a hard time with it. Our culture is one of instant gratification and convenience. However, in order to be successful when teaching a dog, you must put in the time and effort. There is no quick fix.

I was making a return visit to a client who was eager to show me how well she had been doing with her two golden doodles. I approached the front door and knocked. I heard the dogs barking, and then I heard her tell them to go to their respective beds. When she opened the door to invite me in they both moved from their beds ready to bound to the door. My client calmly closed the door and placed them back onto their beds. Once again, she opened the door. One dog moved from his bed, so she closed the door again. When she opened the door the third time, the dogs, again got up, as I took a step into the house. Instead of closing the door, as she had done the previous two times, she used her body to move them away. She only insisted that they back away from the door and not return to their beds. Within a few seconds I was allowed in the door and was greeted nicely by both.

Her technique was perfect–until the third try. She failed at the follow through by not requiring them to return to their beds. The dogs now think that in order to get a reward (the guest), they must sit by the door, rather than on their beds, since each time they were on their beds the guest did not come in. When I asked her why there was inconsistency in her follow through, she stated that she wanted the dogs to not greet her guest until given permission. She simply wanted them away from the door. All she had to do was decide where she wanted her dogs at the time of her guest’s arrival. Were the dogs to be in their beds, or were they to be sitting just inside the door? Once she decided where that spot was, she should follow through, regardless of how many times she would have to shut the door and wait for compliance.

Many people will not stick with a specific training technique if it does not work fast enough. When they switch techniques they do not give the dog an opportunity to problem-solve and eliminate the behavior the owner wants extinguished. If you acknowledge a behavior 1 out of 10 times you are sure to see that behavior again. If you ignore that behavior consistently or interrupt appropriately, the behavior will extinguish. Not every behavior will extinguish quickly so be patient with your techniques and give them a chance to work. Be confident and consistent and follow through with the technique until you get the desired result.